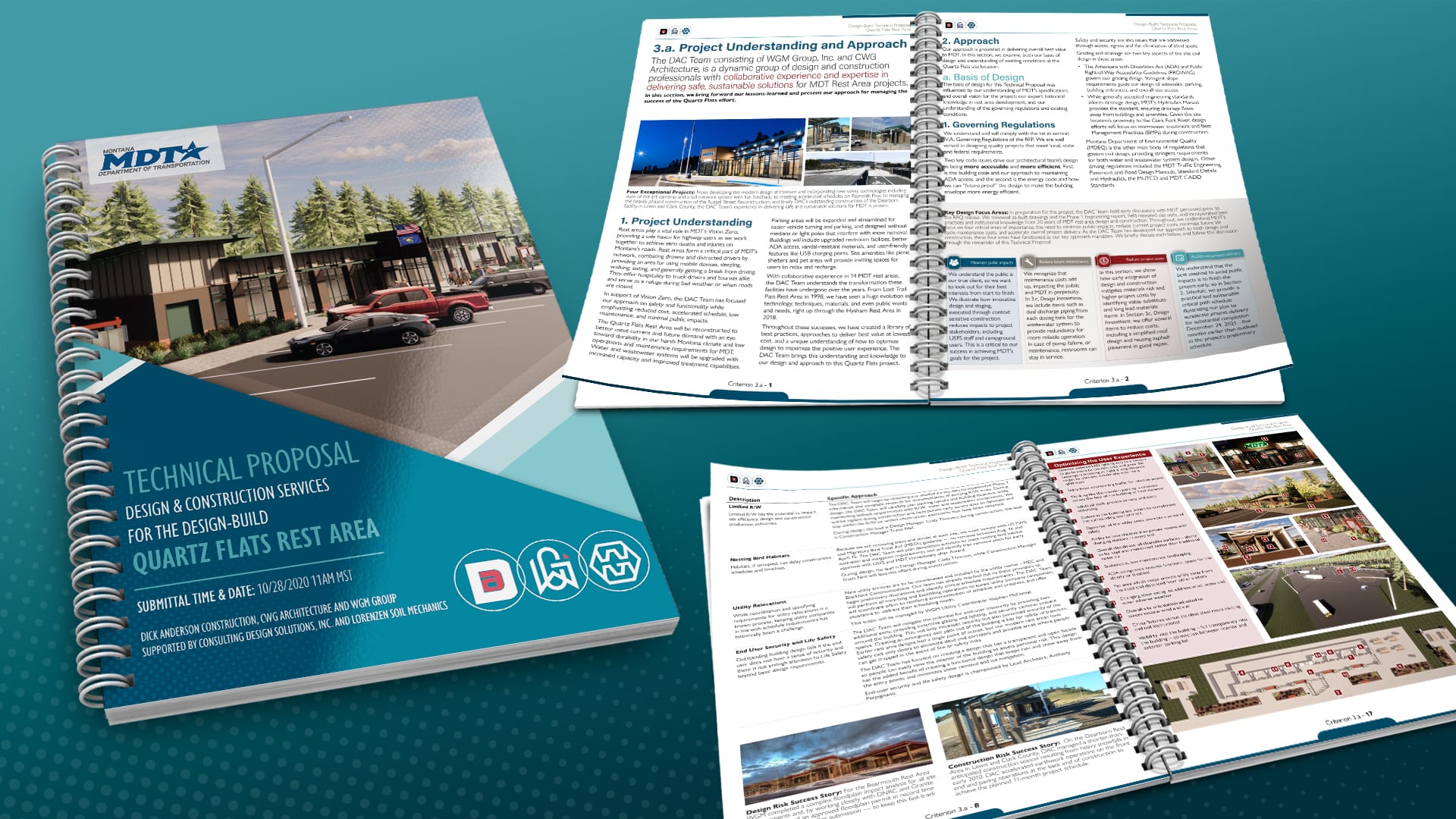 Mission Critical managed this Design-Build pursuit for Dick Anderson Construction (DAC) to win the Quartz Flats Rest Area project from the Montana Department of Transportation (MDT). This project is a Best Value procurement from MDT, meaning that qualifications scoring was weighed against bidding information to select the best partner. DAC was not the lowest bidder, but thanks to a joint effort between their team and ours, we were able to position them as the best value choice for MDT.

We came into this pursuit at the last minute, with just a couple of weeks to get a new client team up to speed with our process and get them on board to provide all the necessary information to create a thorough and detailed technical proposal. Mission Critical collaborated intensively with the DAC team, hosting charrettes and focus groups to garner insights into the team’s approach.

It was evident early on that although the team had successful experience with design-build projects, there was no written system or approach. Through interviews and meetings, Mission Critical set about codifying their approach, detailing how they move through the design-build process and how they interact with the Owner and move from preconstruction to construction. This clarity helped to demonstrate their qualifications as a contractor and partner to MDT.

The team had a similar block when identifying their innovations and value-added approaches for this project. DAC is a qualified firm with a talented team that brought a significant amount of betterments to the MDT specs, but it was challenging for the team to single out these improvements since they have become a natural part of how they plan. Mission Critical broke down all of MDT’s goals for this project as an extension of Vision Zero and put these in conversation with DAC’s plans. Through these focus groups, we were able to isolate a myriad of improvements from the DAC team, and our writing staff clearly and concisely outlined them for the MDT selection committee.

By codifying the team’s approach to design-build and communicating their innovations, DAC was positioned as the best value contractor selection for this Quartz Flats Rest Area project. Although DAC’s price bid proposal was not the lowest of the submitters, they were scored the highest in the technical proposal – scoring nearly 5,000 points higher than the low-bid firm. The cumulative scoring placed DAC as the highest in Apparent Best Value, winning them this important project.